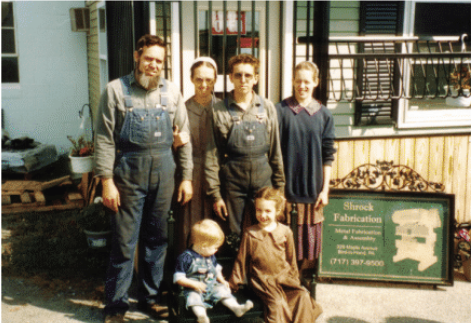 Stanley and Carolyn Shrock brought their family of seven children to the village of Bird-in-Hand in 1998. As a foundational part of a Midwest compost turner manufacturing firm, Stanley had developed engineering and welding skills. He moved to Bird-in-Hand to work with Carriage Machine Shop on Maple Avenue in their compost turner and horse stall divisions.

In 2000 Stanley moved the horse stall division into the former Miller Metalcraft facility at 229 Maple Avenue and began Shrock Fabrication under the umbrella of Carriage Machine. There he used skills learned from his mentors. Stanley also joined the National Ornamental & Miscellaneous Metals Association (NOMMA) to expand his expertise in the wrought iron industry. Shrock Fabrication collaborated on projects with other local fabricators and established a place for themselves in the community.

Stanley’s son, Kendall, has joined him in the family business and they work together on a wide range of metal projects. Working along with them to manufacture high-end metal products is a team of skilled craftsmen.